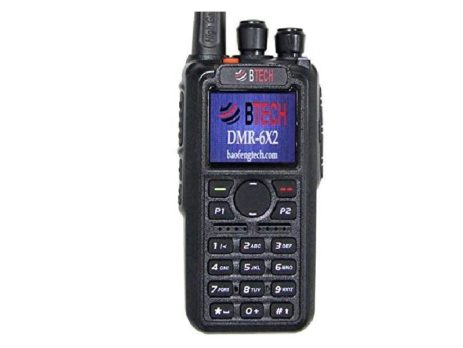 A couple of days ago, I got my hands on a BTECH DMR-6X2, a dual-band DMR and analog handheld radio. Designed for both amateur and commercial usage, the DMR-6X2 is a true, dual-slot DMR radio compatible with DMR Tier I & 2. It features a large, bright 1.77″ color TFT display and can store up to 4,000 channels, 10,000 talk groups and 150,000 contacts.

The first thing I did was to set it up to access an analog repeater here. This was relatively straightforward, as I am the owner of a BTECH UV-5X3, and the menu structure is pretty much the same. One difference that I noted is that instead of two settings—offset (in kHz) and direction (plus or minus)–there is only one setting, the transmit frequency. This makes it simpler to program the radio manually.

One mistake that I made is that instead of programming the radio to send CTCSS tones, I set the receive tones. This confused me at first, but once I figured out what I did wrong, I was able to quickly correct the error and was on the air.

As I was paging through the menu selections, I noted that the DMR-6X2 has a menu selection for mic gain (Mic Level). This is an option you normally don’t find on handhelds. You can select levels 1-5, with the default being level 3. That seemed to work just fine for me, but if you have a softer or louder voice, you may want to adjust this level.

Another interesting feature that I found while I was browsing the menus is GPS Info. The DMR-6X2 has a built-in GPS receiver! After I set that up, and gave it a couple of minutes to find the satellites, I discovered that my coordinates are 42.295666N and 083.751836W. This is a feature I’m going to investigate further at a later date.

After that, it was time to program the radio. To program the radio, you must download the software from the BTECH website. While I was on the web page, I noted that there was also a firmware update. I downloaded the zip file and extracted the files to the PC in my shack.

At that point, I noticed that I’d left the programming cable upstairs. Feeling a little lazy, I guessed that I could use the UV-5X3 cable that I had there in the shack. The cables look very similar, and neither has circuitry inside the cable.

Boy, was I ever wrong. While the computer recognized that there was a USB device connected, it wouldn’t install the appropriate driver, and the programming software would not communicate with the radio. After goofing around with this for more than an hour, including an email to BTECH support, it dawned on me that I should probably try the cable that came with the radio. BINGO! That worked like a charm.

With that out of the way, I upgraded the firmware to V1.05, which has some cool new features, such as allowing you to have either a blue or black display. Following the supplied directions, this went without a hitch. Next, I’ll be programming the radio for DMR operation. Stay tuned. 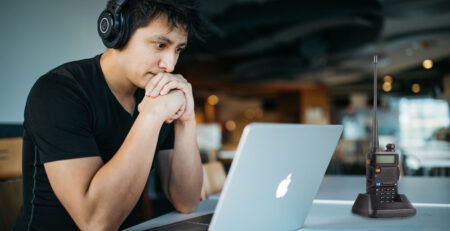